ARMY VS NAVY - WHY IS THIS GAME SO IMPORTANT TO COMBINED ARMS?

Every year in early December, the Midshipmen of the Naval Academy and the Cadets of West Point play what has widely become known as America’s Game.  Regardless of what you think of the sport, the institutions, or even the service, the game represents the best values of our military and veteran community.  Let me explain... 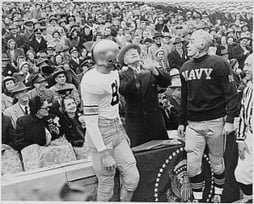 During the game these two teams are competing against each other, but after the game they are united around a single mission...the defense of the United States of America. They know that in the near future they will work side-by-side with their sister services, depending on each other to accomplish the mission. After these cadets and midshipmen receive their commissions and complete specialized training they join their units.

At the unit level they learn to work with other units with differing specialties during Combined Arms Exercises. Infantry, aviation, artillery, transportation, signals, etc...different units all working together to achieve a common objective. This is collaboration.  It is in our DNA.

Combined Arms was born out of necessity in 2015.  Leaders in the veteran and business community wanted to ensure that we were prepared to support the anticipated 5,000 transitioning service members and their families that we expected to arrive in the greater Houston area every year as the military end strength numbers were being lowered.

So we just started. Meeting as a small collaborative with a mission to “unite the community to accelerate the impact of veterans on Houston” by gathering the best-in-class organizations and streamlining the connection between veterans & organizations and providing accountability between them.

What started out as an idea became a reality.  In the past 2 years we have…

I’ll leave you with a story about last year’s Combined Arms Army vs Navy Watch Party that we hosted along with the Naval Academy & West Point Alumni Association.

A few weeks before the game, an advisor of introduced me to an entrepreneur (and West Pointer) who was looking to get involved in the veteran community.  He came by for coffee and he told me he was struggling. His business was failing. He and his wife were having marriage problems and he was fighting depression. But he’s a veteran, so he is resilient and determined. We connected him to resources and I invited him to the Army-Navy Game.

After the game we spoke and he had a great time at the watch party.  He re-connected with classmates and friends who he had no idea were in Houston. He’s now part of a community and has access to a support network.  He is a regular attendee of events held by our organizations, is getting the help he needs and is making an impact on our community and our city.

So, why the Army vs Navy Game - America’s Game - so important to Combined Arms?  It is a way for us to promote engagement with veterans, their families and the community and to increase awareness of what resources are available to them through Combined Arms. It’s also a really fun way to do it!

So here’s how you can help us!